The Man in the Kitchen 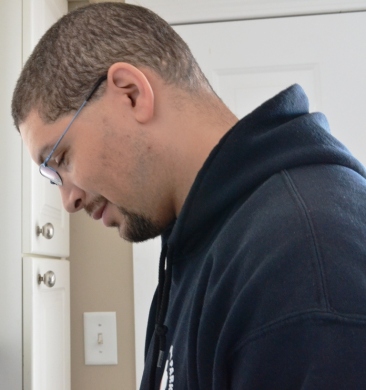 My Man in the Kitchen.

Baking and cooking produces two things: food and dirty dishes. We all like the food but no one really likes doing the dishes afterwards. If you have a dishwasher you are one of the lucky people, if you are like me, you don’t have one. I am one of those people who doesn’t like doing the dishes but will do them of course when necessary. But fortunately I have a husband, he’s my man in the kitchen.

My husband is a great guy, he learned well from his mother. He does the vacuuming in our house, he does the laundry as well and he is the dish washer, literally. It is our way of splitting the house work, and honestly he has the bigger portion. 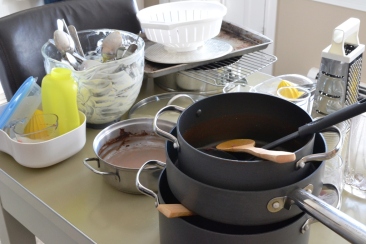 No one likes this sight.

My husband is not much of a cook, and lets not talk about baking. He can make Mac&Cheese in the microwave, he can cook rice in the microwave and vegetables too. But the stove top is not necessarily his friend. He thinks the microwave is faster, sometimes it is but not always. Besides that, he doesn’t like to think about what to make either. If I ask him “Can you make supper?” his answer would be “I don’t know what to make.” If I tell him however “Can you cook rice, vegetables and fry some chicken.” then his answer would be “Ok.” or “How much?” My husband needs instructions to cook.

He sort of smiles, it can’t be that bad.

Most of the time though I am the one who throws something together, or thinks about it really hard. Naw, maybe not that hard. At the end of the day we have a pile of dishes of course. I would do the dishes but I always hear complaints: “The water you use is not hot enough.”, “If there are no bubbles then there is no detergent.”, “You don’t rinse the dishes in scolding hot water. Why not?” I guess you get the point.

Whisks are mean things to clean.

Now, don’t think I don’t know how to do dishes, I worked at Subway for 5 years and they are particular about their stuff. But I don’t have a commercial three-sink sink. I also don’t like to burn my hands, thank you very much. And I hate it when I have a bunch of bubbles but can’t see what’s in my sink.

Look! A bunch of clean dishes.

My motto is: “If you don’t like it the way I do it, do it yourself.” So he’s doing the dishes because he’s so particular about it. Of course there are also complaints on a regular basis because he sometimes has do wash the same item twice or three times, especially when I am baking or cooking at the same time.

I love this sight, you too?

It is not my fault that some recipes asking me to mix dry ingredients in this bowl and then other things in that bowl and something else in another bowl. I am not a fan of that and I know it’s annoying for him. If I could bake or cook in just one bowl I would do that, believe me. If I could just use one spoon, I would do so. But we all know it doesn’t work like that. 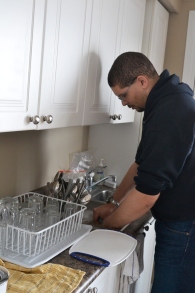 See, even the glasses.

So, I would like to thank my husband for doing the dishes for use since I moved in August 2010. I like to thank him that he will continue to do so until, well, lets say for hopefully a long long time. I know he doesn’t like doing them very much either but is doing them for me and my sanity. It’s great to have such a good husband, I pay him back in cookies, cakes and sweet treats.

Take a KitchenAid Artisan machine, a young wife, time, creativity and mix it well. You end up with endless options of baking goodies from German torte to North American cupcakes. Follow me on my baking and cooking adventures and throw in your cent or two. There are no limits!
View all posts by andreamacleod »
← German Cheese Cake
Applesauce Cupcakes with Cream Cheese Icing →