I think there are several recipes that are the kings and queens of recipes. Croissants and puff pastry belong to that category because it is a long, time consuming, “If I do this wrong it is ruined” process. However, I wouldn’t be me if I wouldn’t try it. I said it before and I will say it again: most recipes I make I have never done before and I have no clue if they will turn out. Lucky for me they do turn out all the time. (I don’t want to brag, I am surprised myself.) So, last Monday I boldly ventured into the kings/queens land of baking recipes and took on the challenge to make french croissants simply because I have nothing else to do on a Easter Monday.

Several weeks before I picked up the “Mastering the Art of French Cooking, Volume Two” by Julia Child and Simone Beck off the shelve. I had it sitting there for some time and I really wanted to make something. Why not croissants, it’s the easiest thing in the world…*cough* The introductions says “The minimum time required for making croissants is 11 to 12 hours.” (page 96) Right there I knew I had to do that over the weekend because there is no way that I would be able to do it after work, into the night. Though I am an owl I am not that good.

Warning! This is a longer blog post, which shouldn’t be a surprise considering the while affair to make croissants takes about 12 hours. You might just want to scroll through and just look at the pictures.

Tip 1: I think I do not need to say this, but just in case: this is not something you should attempt if you just started baking. I always say that baking is not difficult and everyone can do it. But croissants need a certain amount of experience so I recommend you make other things first, like pie crusts. (Those can be scary too btw.)

Alright, here we go. Are you ready?

Mix the yeast in warm water with sugar and let it sit until it is completely liquefied. While waiting measure the other ingredients. Dissolve the sugar and salt in the milk and add together with yeast and oil. Now blend everything in the bowl using the rubber spatula. Be careful not to over mix, just make sure all the flour has been gathered. Turn the dough onto a clean surface and let rest for 3-4 min while cleaning the bowl, you will need it again.

Start kneading by lifting near edge, using scraper, and flipping it over onto the other side. Rapidly repeat the movement from side to side and front to back, about 8 to 10 time. The dough should feel smooth and draw back when pushed out. This is all kneading because you do not want to over-active the gluten.

After the dough has risen you need loosen it from the edges and turn it onto a lightly floured surface. Now dust your hands with flour as well and lightly push and pat the dough into  8 by 12 inches. Then fold it like a letter and place back into the bowl for the second rise of 1.5 hours, which should double its volume. After the second rise the dough needs to be turned onto a lightly floured plate, covered with plastic wrap (air tight) and placed in the fridge for 20 min. 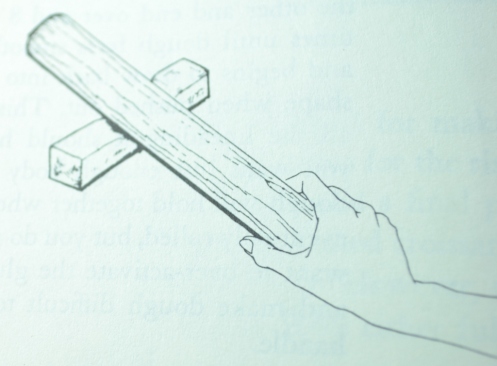 You will need 4 to 7 ounces of unsalted butter. This needs to be softened but not warm, it should stay cool. If not, place back in the fridge. Using only 4 ounces will suffice for the first attempt, it certainly was enough for me. Beat the butter with a rolling pin to soften it up. After that you use the heel of your had to push it out and using a spatula to fold it back in.

Tip 3: Look at the pictures for reference, that really helped a lot.

Place the chilled dough on your floured working surface and push it into a 14 by 8 inches rectangle. Then spread the butter on the first 2/3 of this as evenly as possible. You should leave 1/4 inch border around all edges. Time for fold again, like a letter. The lower third with no butter goes up, the upper third with butter goes down. 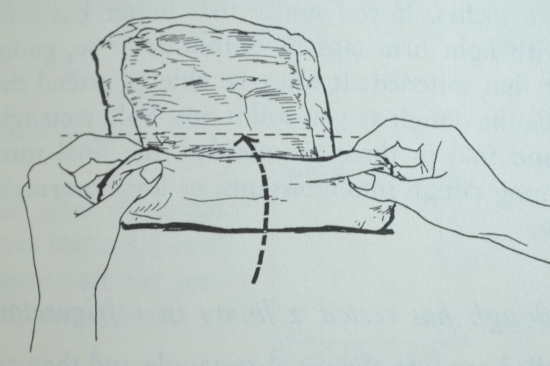 For the second folding you will turn the folded dough in such a way that the top flap is on your right. Lightly dust with flour and roll it out into 14 by 6 inches and fold again in three. Time to let it rest now, so dust it again with flour and wrap it up in plastic wrap. Place the dough into the fridge for 1.5 hours.

After that it is time for the third and fourth folding. Tap the dough lightly with your rolling pin to deflate it and let it rest for 10 min. Then roll it out into 14 by 6 inches again and fold as before. Should the butter feel very hard in between layers you can lightly tap the dough with your rolling pin, softening the butter. Roll out a fourth time into the same shape and fold again. Time to rest again, so wrap it up and back into the fridge for 2 hours.

Finally it is time to at least shape the croissants. Take out the dough, place it on you floured working surface, lightly tap it with a rolling pin and let it rest for 10 min. Roll it into a rectangle of 20 by 5 inches and cut it in half. Place the second half in the fridge, that way the dough will be better to work with. The first half needs to be rolled into 15 by 5 inches and cut in three pieces, which each will be rolled into 5.5 by 5.5 inches. Now cut those into triangles and each need to be rolled into a 7 inch long triangle.

Now you can roll them into the croissant shape. Extend the large end slightly, stretch the 2 top angles of the triangle lightly between your thumbs and forefingers, enlarging end about and inch in all. Start rolling up first by folding the large end forward onto itself, then holding the point with the fingers of your left hand and rolling with the right hand. Bend the ends down to form the shape and place on a cookie sheet lined with baking paper.

You can freeze the formed croissants now or you let them rise for 1.5 hours in a warm place, covered lightly with plastic wrap. Before you bake them you should glaze them with egg wash, which requires one egg and 1 tsp of water, mixed in a bowl. Bake at 475°F (that 250°C) for 10 to 15 min. Transfer them to a wire rack to cool them out completely. You can freeze them now for later or eat them fresh with whatever you like.

Tip 4: Julia Child says that croissants are best fresh and that even after a day in the fridge they won’t taste as good anymore. I had them out for two days, just covered with plastic wrap and the second day they were a bit tough but still nice after a few seconds in the microwave.

Phewww, we made it. You should have 12 croissants by now, which are light and golden brown. I sincerely hope they are like that, mine were and I was happy. Except the salt, I thought they were to salty and I will only add 1/4 tsp. in my next batch. You can eat them plain, with some butter, with jam, with nutella, or you cut them open and stuff them with scrambled eggs and ham, anyway you like. Next time I think I will add some cinnamon before rolling them up.

Take a KitchenAid Artisan machine, a young wife, time, creativity and mix it well. You end up with endless options of baking goodies from German torte to North American cupcakes. Follow me on my baking and cooking adventures and throw in your cent or two. There are no limits!
View all posts by andreamacleod »
← Guest Post by Helene
Chocolate Covered Bacon →