Chocolate, fruit and whipped cream…what else do you need?

Last Sunday was crazy with two parties to attend and to cater to. The first party was a birthday part with a carnival theme (post will follow), the second party was a bridal shower. Now, we don’t really do bridal showers in Germany. We have a party for everyone before the wedding, e.g. wedding eve party. Your friends and family come together and bring gifts, have a good time, smash some porcelain for good luck and just celebrate. Since I am not too familiar with bridal showers I was wondering what to do. First question for the bride to be: What do you want?

Interestingly, that question was answered by her mother who thought I was talking about a gift and suggested towels. While I think a towel cake would be hilarious it was not quite what I was looking for. The bride to be though answered that she likes chocolate so I had something to go out.

At the office, during a lunch conversation, I found my inspiration. One of my co-workers said she had to buy cherries because she was making a Black Forest Cake for a party. Bingo! That’s just it. It’s a nice cake, which chocolate, but also fruit and though whipping cream is included it is rather light. My mind was set, all I needed was the recipe. Thankfully one of my books has one and off I went to the kitchen. The Black Forest Torte is sort of the queen of tortes, at least in a lot of people minds. Especially here in Canada or North American it seems to be THE German food (besides Schnitzel, Bratwurst and Sauerkraut).

Separate the eggs and mix the egg yolks with 8 tbsp. warm water and sugar, mix until fluffy. Melt the butter and fold in. Then beat the egg whites until stiff and pour onto the egg yolk mixtures. Finally, sift the flour, cocoa powder and corn starch on top. Fold in well but carefully.

Line a spring form pan with baking paper in the bottom and fill with batter. Bake in preheated oven at 200°C for 30 min. 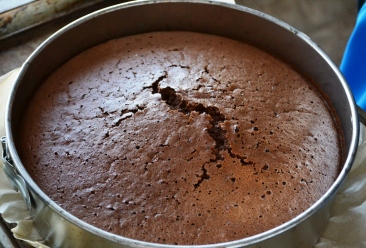 Tip 1: Make sure you batter is well mixed so that you have no flour clumps. However, do not over mix because the egg white is what will make the batter rise. This is a bit tricky and requires a certain amount of practice. I didn’t get it completely right the first time, but the cake was still good.

Tip 2: Depending on your oven the cake might take longer. Always check with a toothpick or skewer if the cake is done. If it comes out clean you are good to go.

Drain the cherries and catch the juice. Make sure you cherries are as dry as possible. Take 16 cherries aside, they are for decorating later on. Measure 250ml from the cherry juice and take 2 tbsp. to mix with the corn starch. Bring the rest to a simmer and then add the corn starch mixtures. Bring to a boil and add the cherries, mix well and let cool down. 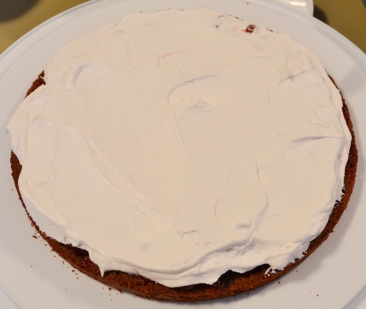 A layer of cherries and whipping cream.

Now cut the cake into three layers. Depending on how high the cake rose it might be a bit tricky. Cut around the edge with a sharp knife and just thread to cut all the way through. Separate the layers. Starting with the bottom layer, brush with Kirschwasser. Whip the cream with icing sugar until stiff, then spread half the cherry mixture onto the bottom followed by 1/3 of the whipping cream. Spread nice and evenly and place the second lay on top. Brush with Kirschwasser again, use the rest of the cherry mix and another 1/3 of the whipping cream. Place the top on it and place the torte in the fridge to cool it for a while, maybe 30 min. Place the left over whipping cream also in the fridge.

After 30 min, take both out and decorate the torte. Spread some whipping cream around the edge and on top, leave enough to pipe 16 swirls on top. Each will mark a slice of cake. Place the cherries onto the swirls and sprinkle the cake center with grated chocolate.

Can you see the cherries?

Now you finished one of the most popular tortes in Germany and I would almost say “the signature cake/torte” for Germany internationally (besides Stolle probably). In Germany you can only call and sell a torte Black Forest Torte if it fulfills certain criteria, which is controlled by the government. Yes, Germans like the rules and regulation. 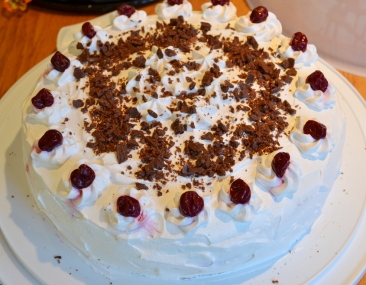 The finished torte at the party.

Take a KitchenAid Artisan machine, a young wife, time, creativity and mix it well. You end up with endless options of baking goodies from German torte to North American cupcakes. Follow me on my baking and cooking adventures and throw in your cent or two. There are no limits!
View all posts by andreamacleod »
← Review: Brownie Liners
Carnival Cupcakes →