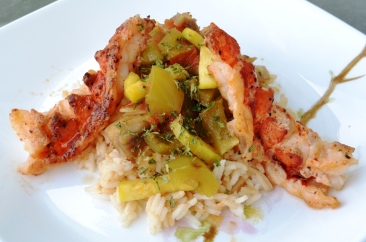 Wow, I am sorry. I have been gone from the blog for a week. *ups* I didn’t mean to, really! It just happened that I was busy. However, I have not been idle so here we go. Oh, this is a rather lengthy post btw.

The celebration still continues for Julia Child’s 100th birthday, namely by cooking and baking some of her best dishes. One of those dishes is Ratatouille, and although this is from some weeks back, I decided to make it now. The dish is vegetarian so I had to change it up a little bit for my husband, who likes his meat and rarely eats only veggies.

You all probably remember the movie Ratatouille with the little rat that wanted to be a chef. I so can relate to that, not the rat, the chef part. I would say that movie helped a lot to promote the dish Ratatouille, at least in North America. All veggie dishes are probably not all to common among the average North American person, many people (from my experience) enjoy their meat. Fair enough! But once in a while it is nice to step back, look at what you eat and maybe pass that steak, pork roast or chicken filet. Instead, go for some fish, or just plain vegetables.

The recipe is  excerpted from Mastering the Art of French Cooking by Julia Child. Copyright © 1961 by Alfred A. Knopf. Reprinted with permission from the publisher Alfred A. Knopf, a division of Random House, Inc.

First off, finding a nice egg plant was a bit of a problem. Maybe I was looking at the wrong grocery store, I am not sure. I also know that next time I have to cut it differently and pay more attention when cooking the vegetables. 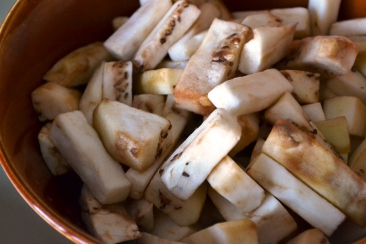 Peal the egg plant and slice 3/8 inch lengthwise, 1 inch thick and 3 inches long. I saw some pictures of Ratatouille where the egg plant was not pealed, I guess it depends how big it is and how tender the skin.

Scrub the zucchini, cut of both ends and cut it in the same fashion as the egg plant. Then sprinkle both with salt and toss, set aside for 30 min. After that, drain any liquid and dry each slice in a paper towel.

Tip 1: I have issues with inches and couldn’t imagine how to cut this up, so I basically just cut them as I felt like it should. Also, I did not dry each piece in a paper towel. Next time I will draw a 3D model of that slice so I know what I am doing. 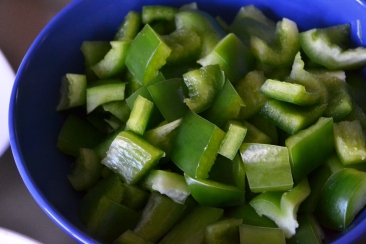 Heat your frying pan, add olive oil and saute eggplant and zucchini, one layer at a time, for about 1 min so they are slightly brown. Make sure your frying pan is hot so that it actually browns the vegetables lightly in a minute. Place in a bowl an set aside.

Turn down the heat, add some olive oil and cook the onions and bell peppers slowly for 10 min. Try to avoid browning and season with garlic, salt, and pepper. Use a lid to keep the moisture in.

Tip 2: I cooked my bell peppers a bit too fast, they browned somewhat and lost in colour. As far as I understand this dish you want colour. I also didn’t use fresh garlic but powdered garlic, it’s just something I don’t like very much so I try to stay away from it.

While you wait for the onions and bell peppers, cook some water to peal the tomatoes. Cook the tomatoes, one at a time, for 10 seconds. Cut out the stem and then peal each tomato. Slice in half, not through the stem, and squeeze out the juice, then cut them in 3/8 inch strips. Season the strips and then cover the onions/bell peppers with them. Cook for about 5 min or until the tomatoes have rendered their juices. Baste, e.g. cover the tomatoes with their own sauce and then boil it for several minutes.

Now it’s time for the casserole: take one third of tomato-onion-pepper mix and put that in the bottom, sprinkle 1 tsp. parsley on, then one half of the zucchini-egg plant mix, another one half of tomato-onion-pepper mix with parsley again, the last of the zucchini-egg plant mix and finally the rest. Let that simmer covered for 10 min and then baste and cook uncovered for another 15 min. Serve hot or cold.

Tip 3: My problem was that I had no casserole that can go on a stove top, I used a wok pan. Also, it says you should be careful of your heat because you should let the bottom burn. HOWEVER, you are not suppose to stir it. *sigh* 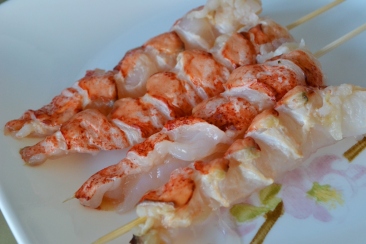 Frankly, it didn’t know my socks off, it’s actually a lot of work for something rather simple. While the taste was nice it’s not a dish I would do on a regular basis.

To spice it up a little I cooked some lobster tail, which is fairly simple. I used frozen lobster so obviously it should be defrosted. Then you need to cut open the tail and carefully remove the meat. The package gave a good hint: use skewers to make sure the tails are not curling. Then fry them lightly in a pan, adding spices as needed. Remove the skewers and serve with ratatouille and rice.

Take a KitchenAid Artisan machine, a young wife, time, creativity and mix it well. You end up with endless options of baking goodies from German torte to North American cupcakes. Follow me on my baking and cooking adventures and throw in your cent or two. There are no limits!
View all posts by andreamacleod »
← Onion Tart
Very Healthy Muffins →