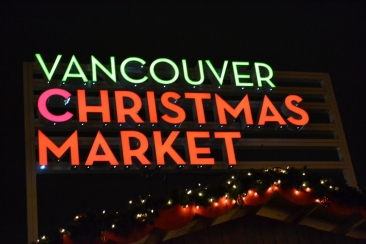 My husband and I made it safely to Vancouver, that was a 17 hour trip in total. First through Llyodminster, then Edmonton, through Jasper and then a night over at Valemont. From there we went through Kamloops and all the way to Vancouver. After a little break at the Bed & Breakfast we went over to the German Christmas Market

First things first: Glühwein. Now I didn’t take a pictures of that, but frankly, there is not much to see. It’s hot red wine with various spices and citrus flavour.

After that we had Bretzels. They are called Pretzels over here, though that’s not quite correct. Pretzels are the little ones that you eat as snack. Bretzels are made of dough and are still considered a sort of snack but with something hardy, like a sausage.

Since Bretzels are not enough for supper (we had no lunch) we looked for a bit more. I heard that there would be Leberkäse, which is meat loaf. My husband got the Currywurst though. Both came with Sauerkraut, which is a bit unusual but was still yummy.

After that you need of course some dessert so we got some waffles. My hubby got one with maple syrup, I got the one with cherries. Other options would have been with whipped cream or chocolate syrup or icing sugar. It was quite yummy and they were on a stick, which is quite genius.

The rest of the market was full of crafty things, like Christmas ornaments, wooden pyramids, smokers, nutcrackers, other food to purchase (like oil and nuts), hats and mittens, and so on. It was pretty much what one would expect from a market.

Tomorrow we have some time for Vancouver itself but need to get to Victoria at some point to meet up with family. Then it’s time for Christmas dinner and we’ll see what we’ll have for that. I would assume turkey, but maybe I get a surprise. 😉

Take a KitchenAid Artisan machine, a young wife, time, creativity and mix it well. You end up with endless options of baking goodies from German torte to North American cupcakes. Follow me on my baking and cooking adventures and throw in your cent or two. There are no limits!
View all posts by andreamacleod »
← That little bit of fame and a vacation
Christmas Dinner →