The final product. A little dry but still tasty.

Since we are pretty much through with the Christmas Cookies I’ll give you another great Christmas recipe: Stollen (or as my family says Stolle). This is a Christmas cake so to speak made from a yeast dough. I guess it is similar to fruit cake, but not. I think Stollen is a thing by it’s own and can’t really be compared to anything else. Like Strudel, you can’t compare that to anything else either. This recipe comes from mother, like so many others, and I would assume it was handed down from grandma.

Interestingly, I don’t recall anyone ever making it. Most of the time we bought our Stollen from the bakery. By now you probably know that I don’t like raisins which means Stollen is not really the thing for me. However, there are other options, like Nougat Stollen or Poppy seed Stollen (not that I like poppy seed but for those who do this is great). This year of course I had to try it and make my own. See the results after the “Read the rest”.

Making Stollen will take some time as it is a yeast dough. Make sure you have all ingredients ready and at room temperature somewhat before you start.

First of all, take the raisins and soak them in the rum. The amount you use is up to you, the more rum you use the more flavour you will have. Sift the flour on your working area and make a dent in the middle. That’s where the liquids will go. Heat some of the milk slightly so that it will support the yeast and make a sponge. Let this sit so it can rise. (This part gave me a little headache and I have a feeling I did it wrong.) Add sugar, vanilla sugar, lard and butter, grated lemon peel (you can dice this), grated almonds (dice it), rest of the warm milk and knead it well. Add raisins at the end and knead again. Place the dough in a warm spot and let it rise for 2 hours.

Issue 1: Since I haven’t found fresh yeast yet I am using dry quick rise yeast. 40g of that requires a lot of milk and the 300ml wasn’t enough. You might want to use more than that so that because my dough, after I knead it together barely rose. 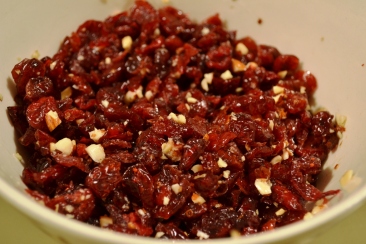 Cranberries and nuts mixed with rum.

After the 2 hours knead it again well and separate in two doughs and from bread like shapes. Press a “trench” along the long side, “dividing” the dough in two different large parts. Turn the smaller one slightly over the larger one, which will create the typical Stollen form. Place on a cookie sheet lined with baking paper and bake at 180°C for about 60 min.

Issue 2: Finding out how to fold the Stollen was an issue for me. I just couldn’t imaging what they were talking about. So I googled it and found this one: How to make Stollen in pictures. This is genius though she makes way more than this recipe. 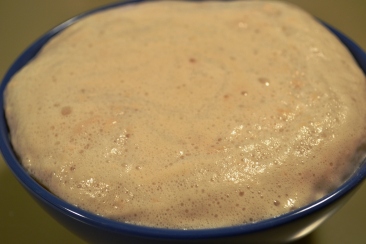 Issue 3: My Stollen got pretty hard after it cooled down or should I say dense. Now this could be because I only used half the recommended amount of raisins (I didn’t have more) or because it didn’t rise as expected.

You can see that I already added the sugar, might have been a mistake.

It should sit for two weeks, some let it sit for even 4 weeks. After that amount of time you should end up with a nice Stollen with rich flavour. Now it’s ready to serve during Advent Sunday or when ever you feel like Stollen.

Tip 1: If you don’t like raisins then you can substitute them with dried cranberries or cherries. Make sure you chop them a bit because those tend to be bigger than raisins.

Tip 2: I wasn’t sure where I could find candied lemon peel. Our local grocery had a mix which is fine. However, the Bulk Barn has them loose, which means you can choose as much as you need. The regular package at the grocery store is somewhat like 200g, which a bit too much. So I would recommend the Bulk Barn (or equivalent store).

Tip 3: There are several option why the Stollen could be dry: either there is not enough butter, or not enough raisins and/or candied lemon peel, or it had something to do with the yeast. Or, which is also likely, the Prairies are a rather dry area, maybe I should have had more liquid in total.
I searched a little and someone recommended to put the Stollen into the oven with water but no heat. Basically, have a cookie sheet with edges filled up with water in a lower rack, add you Stollen (without the sugar and icing sugar) in the middle and above you have another cookie sheet with water. I will try that and let you know.

A lot of butter needs to go on the Stollen, especially if it’s dry outside.

Tip 4: Put aluminum foil underneath the baking paper so that the heat from beneath won’t burn the underside of you Stollen.

I hope you will try this one.
Happy Baking

Take a KitchenAid Artisan machine, a young wife, time, creativity and mix it well. You end up with endless options of baking goodies from German torte to North American cupcakes. Follow me on my baking and cooking adventures and throw in your cent or two. There are no limits!
View all posts by andreamacleod »
← German Gingerbread
The “No baking” post →