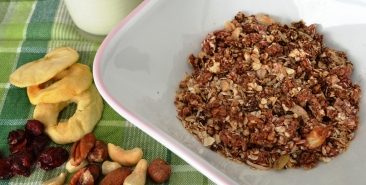 Two days ago I posted about French Toast, which is awesome for breakfast, just like Waffles or Pancakes are awesome for breakfast. But we all know we don’t have the time to make those delicious breakfast options every day. (If anyone out there does…can you please come to my house?) So, most people will have toast, or cereal of granola to start their day. There are thousands of options at the grocery to choose from, especially colourful or flavourful ones for the kids among you. However, it can get boring after a while and then it’s a great idea to make some for you own.

I am as much a cereal person as many of you and back in Germany I had one or two of them I stuck to. Here, I mostly had cheerios, preferably the ones with the four types. Best – flavour – ever! But, looking at the price of a regular 350g box I stuck the with plain old cheerios. Mix a hint of chocolate syrup in it and I am good to go. Then I got bored of it. What else to do? I don’t really like bran all too much, and shreddies are not my cup of tea either. Research was imminent and I found a nice recipe for home made granola at “Fool for Food”. That’s actually a German page but she got it from Mark Bitman from the New York Times and changed it up a little. Since it sounded pretty good I gave it a try.

I used the following in my granola, a quarter cup each:

Mix them together and chop them up with a food processor. Make sure you don’t chop too finely, otherwise you will have meal instead of little chunks. Of course it is entirely up to you how much you use of each. If you are allergic to any, you obviously do not wish to have that in your granola. Some people might not like the taste of almonds, course you will leave that out too. Though I am not a fan of coconut flakes I figured I could add a little. The flavour will be less noticeable in a mix of 8 cups of ingredients. 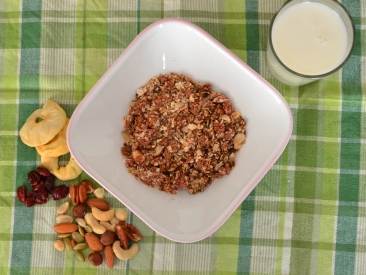 The oil and honey will combine the mix nicely. Make sure you mix well and spread the honey as much as possible. A thin running honey will be ideal, you might even want to use a flavoured one. (I used blueberry honey and it is really nice.) If you don’t spread the honey well enough you end up with big chunks, which will be interesting in your breakfast.

Let the mix sit for about 30 min so that the oats can soak up the liquid. Then spread it on a big baking sheet with a rim, lined with parchment paper. Bake at 180°C for about 30 min, making sure to stir in between so that it browns evenly. Burned pieces will taste bitter in your granola.

Remove from the oven and let it cool off before you mix in dried fruit. This is of course optional and I haven’t done so myself, yet. Store in air tight containers and make sure it stays away from moister, you don’t want soggy granola. 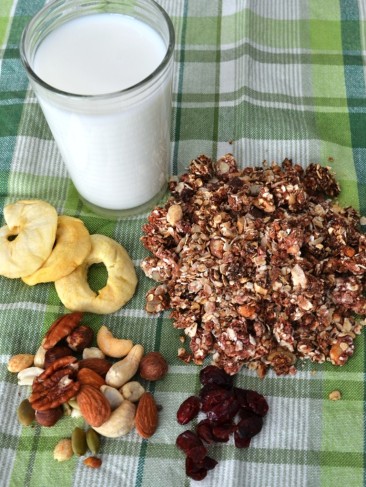 Serve with milk, or yoghurt, I personally use something like DanActive, which is not as thin as milk and not as thick and yoghurt. It also gives the granola and extra flavour.

Take a KitchenAid Artisan machine, a young wife, time, creativity and mix it well. You end up with endless options of baking goodies from German torte to North American cupcakes. Follow me on my baking and cooking adventures and throw in your cent or two. There are no limits!
View all posts by andreamacleod »
← Simple but Great: French Toast
Baileys Mousse Au Chocolate – JC100 Week 2 →