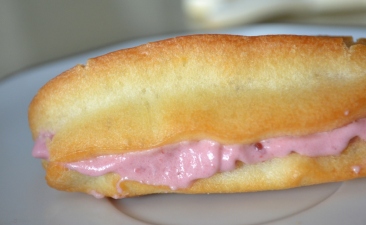 Before I get started: there is a Giveaway on this blog. Check it out: Easter Giveaway!

Most of my baking happens because I want to bring something to a party or meeting. I ponder for a while what I should make and usually find something because I have the ingredients or because it goes with the theme. Most of the time I have never made the recipe before, I like to venture into the unknown and hope it will work out in time.

One of my friends had a baby shower for her daughter on the past Sunday. People are asked to bring a fruit tray or vegetables, a little something to snack on. Cake or sweets are generally also requested and I tend to volunteer for it, it’s my cup of tea. I thought of making a cake or maybe cupcakes. But the first thing that really came to my mind were eclairs. It has something to do with the little girls name… I just couldn’t get my mind off of it and finally, after reading the recipe, I decided to go with it.

Eclairs, much like croissants, seem to be one of those desserts people are afraid of making them. It seems complicated and time consuming. Why bother with putting in so much effort if you can just buy them at the store? Do you want to know the answer? Because it’s not that difficult at all and ten times better anyway. Besides, it tells the person you will give it to that you really worked on it to make it special.

Short side note: I do not mean to offend anyone who goes and buys treats for parts etc. By all means, that’s fair and square and I know there are a bunch of busy people who barely have the time to be in the kitchen to make something like that because their schedule is busy. I don’t want to make anybody feel bad, baking is just my way of saying things like “I care for you”. It doesn’t mean other people don’t care just because they bought the cupcakes. I still things that’s a lovely gesture.

Anyway, back to our eclairs that are oh so beautiful, although I had no clue on what type of dough it would be. Turns out, it’s really simple and not even that time consuming.

First of all, measure all your ingredients to make sure they are ready when needed. Sift the flour on a piece of parchment paper or a plate and set aside. Pour the water in a pot, add the salt and butter and bring to a boil. Once it boils remove from the stove and add the flour (into the pot). Stir well, it will be a bit lumpy. Place the pot back on the heat and stir until a white film on the bottom of the pot forms. The dough should be one big piece. 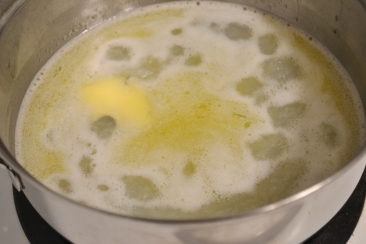 Remove the pot from the oven and turn off the heat. Now, crack and egg to make sure it is fresh and add it to the dough. Stir well until it is combined. This will be a bit tricky because the dough and the egg white won’t mix so well. Once combined you put the dough into a bowl and add one egg after another, stirring in between to combine them. If you have a sturdy whisk you can use that to combine the eggs. The dough should turn into a batter that is somewhat soft, it is likely that it won’t happen until the last egg was added. 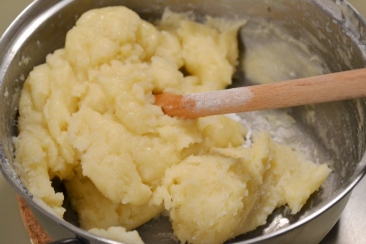 Quickly mixing the flour in.

Let the batter stand until it’s completely cooled down. Then take a pastry bag with an open star tip and fill it with the dough. Place some parchment paper on your baking sheet and start drawing long lines. To make sure your eclairs are big enough you should make the lines thick. You will accomplish this by slowly drawing, allowing the batter to go wide. (Is that a reasonable explanation?) Leave enough space between each line so they do not stick together when baking. 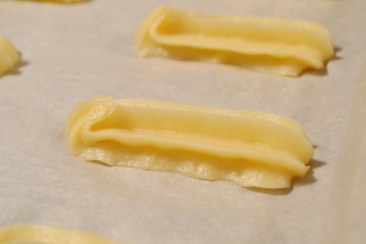 I used the open star tip from Wilton, #1M.

Heat your oven to 200°C and place a baking sheet on the lower rack. Fill it with water (the moister in the oven is important for the baking process). Once the oven is hot and steamy, place the eclairs on the middle rack and bake for 25-35 min. If they have a nice golden-brown finish they are ready to take out. 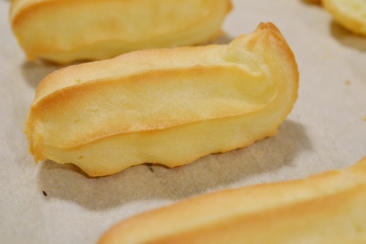 Remove from the oven and cut them open immediately. You might want to use a pair of kitchen scissors. That didn’t quite work for me so I used a very sharp knife. The shell will be hard but the inside will be soft and full of air bubbles. Be careful and let them cool down.

Tip 2: Place in a container and cover so that they won’t dry out and be hard. 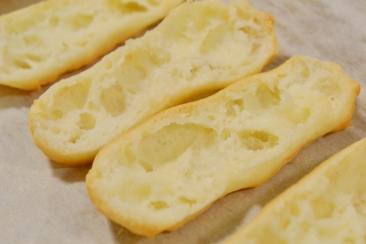 Now on to the filling. This can be either simple whipping cream or you make something with a bit of flavour. I was going for the raspberry cream because the party was for a girl, so pinkish would be appropriate.

Wash the raspberries and drain well. Now puree them well and add the sugar. Prepare gelatine according to package (mine is mixed with 50ml water and then 50ml of boiling water is added). Add the prepared gelatine to the raspberry puree and mix well. Place in the fridge so that it can cool down and set. Beat the whipping cream until peaks form, then slowly fold the whipping cream under the raspberry puree. Once again, place in the fridge to let it set. Then fill a piping bag with the mixture and fill the eclairs. 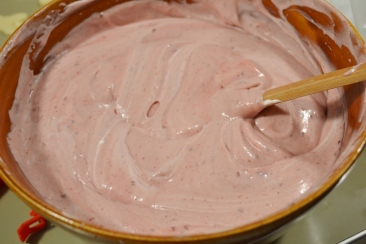 Tasty raspberry cream, not too sweet.

Tip 3: It’s not raspberry time at the moment so I was looking for another option. Raspberry pie filling is a perfect solution. You do pretty much the same thing as mentioned above.

The finishing touch would be icing sugar sifted over the eclairs.

If raspberry is not your flavour you can exchange that with any other berry of course. Or you want to fill them with something like lemon cream or nougat cream? Check this post to see how you make those creams. 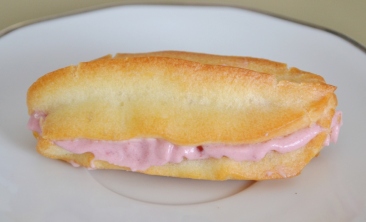 The icing sugar is missing…

Take a KitchenAid Artisan machine, a young wife, time, creativity and mix it well. You end up with endless options of baking goodies from German torte to North American cupcakes. Follow me on my baking and cooking adventures and throw in your cent or two. There are no limits!
View all posts by andreamacleod »
← Easter Giveaway
Lalaloopsy Cake Pops & Confetti Cake →